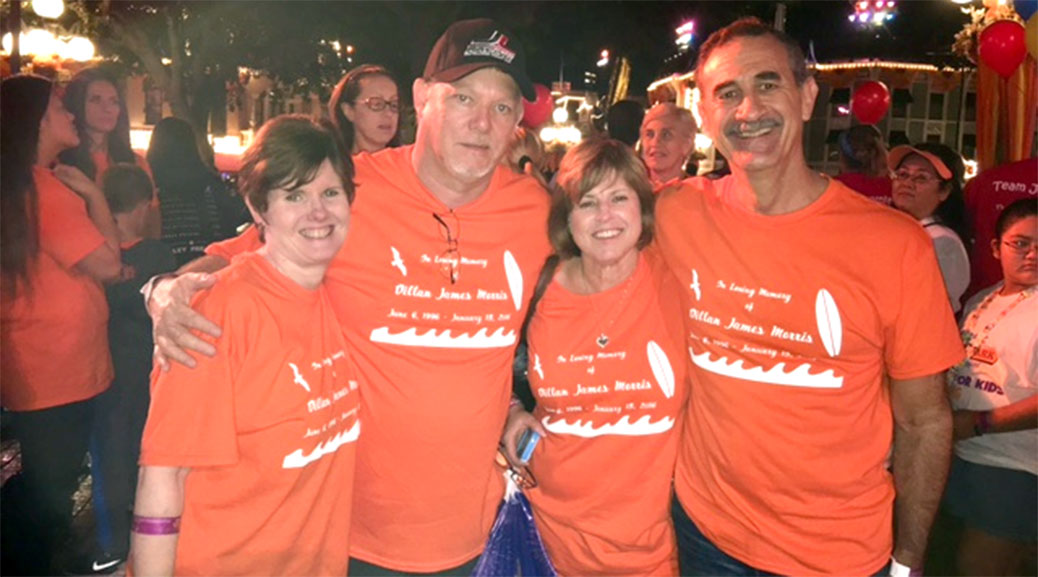 They didn’t know each other. Their only connection was their teenaged children; one fighting a devastating cancer diagnosis.

Then came a letter. And food prepared with love. It was a kind, selfless gesture that inspired a special friendship and, in less than two years, more than 1,600 meals delivered to families at CHOC Children’s Hospital.

Jody Masquefa became – in her own words – obsessed with thoughts of and concerns for 19-year-old Dillan Morris. A friend of her daughter, Dillan had been diagnosed with cancer. She had never met Dillan’s family, but found herself thinking of them often, especially his mom Pam. She wanted to help them in some way, but didn’t want to intrude.

Finally, she got the courage to send Pam a letter. “You don’t know who I am, but my daughter is your son’s friend,” she wrote. Jody included her phone number and encouraged Pam to call if the family needed anything. A week later, she received a text message. Brief text exchanges continued until the family accepted Jody’s offer to deliver a meal to them at CHOC.

“I still remember the moment I pulled into the hospital’s five-story parking structure. It hit me how full it was…how many other families had children who were ill or injured,” recalls Jody. That meal led to her first face-to-face encounter with Pam. Additional food deliveries followed. Even though she become more acquainted with the Morris family, Jody knew she was still very much a stranger in their personal journey.

Sept. 21, 2015. The day the Morris family was forever changed. Their beloved son and brother Dillan, who they thought was suffering from a bad cold, was diagnosed with acute myeloid leukemia and acute lymphocytic leukemia. Just five percent of the population get both forms of the cancer. He was immediately admitted to the Hyundai Cancer Institute at CHOC for aggressive treatment.

Dillan’s mom Pam took a leave from work to stay by his side…each of the 105 days he remained in the hospital. She was there for the chemotherapy, the physical therapy sessions and procedures. There when they received news that his cancer wasn’t responding well to treatment. And there to watch her handsome and athletic son endure everything with strength and courage.

“He never complained. Never asked ‘why me.’ He had a great attitude through it all,” remembers Pam.

Naturally, her focus remained on Dillan. She couldn’t even turn her attention away to respond to a message from the mother of one of his friends. Her sister replied to the stranger on her behalf, sent updates and finally accepted an offer of dinner.

Pam met Jody for the first time in CHOC’s fifth floor family room, where Jody had dinner set up for the family. They talked for a long time. Texts and notes of encouragement followed, as did more meals.

Dillan came home from the hospital on Jan. 5, 2016. Ten days later he died. Jody attended his memorial service and was touched to see a full church, including staff from CHOC. Clearly the young man left a lasting impact on so many.

Once again, Jody summoned her courage; this time to approach Kara Noskoff, one of the hospital’s child life specialists who spoke at the service. She had an idea, a way to pay tribute to Dillan and help other families. “Could I bring meals to families at CHOC?” she asked. Kara agreed to help coordinate the effort, knowing how many families could benefit from such a kind gesture. Jody had one more person to ask: Pam. She wanted to know just how involved Dillan’s mom would like to be.

The first “Love Letters Food Box” was delivered to a family at CHOC on Feb. 2, 2016. The box, nondescript with exception of a small logo designed by Dillan’s friend, held a three-course meal, including beverages. It also contained a letter, unsigned. “This meal is a gift to you to let you know that some stranger out there knows you are here,” it starts. The letter continued with the story of the Morris’ encounter with a stranger, who was deeply impacted by their journey and by the realization that so many families at CHOC were on similar journeys. And that “a meal is often a way to show others that we care.”

Since then, Jody and her volunteers, including Pam, have delivered more than 1,600 meals to CHOC. What began as a commitment to deliver one meal a week has grown to deliveries six days of the week. Pam’s delivery includes blankets, something her son treasured receiving from his friends.

“Jody and Pam are two amazing, caring and selfless women,” says Kara. “They are respectful of our families’ privacy, and wish to know only how many people to feed and any dietary restrictions. They are quiet heroes.”

Jody and Pam’s support of CHOC includes participation in the 2016 and 2017 CHOC Walk in the Park. Their team, including their husbands Yves and Bob, most recently raised $14,000. During the walk, a mom recognized the Love Letters Food Box logo and raced to the group to express her appreciation for being a recipient of one of their deliveries. More families have approached Love Letters Food Box volunteers at the hospital, tearfully giving thanks for the generous and selfless gesture. One family was inspired to start delivering meals to a local hospital in their community.

Jody and Pam are humbled by the gratitude and by the opportunity to be there for others. Once strangers, the two are now close friends, making a big difference in the lives of families one letter and one meal at a time.

Jody and her husband own Yves’ Restaurant and Wine Bar in Anaheim Hills. Jody would like to grow the Love Letters Food Box program. Anyone interested in getting involved can email lovelettersfoodbox@gmail.com.

Due to COVID-19, some fundraising events have been postponed or canceled. Click here for more information.